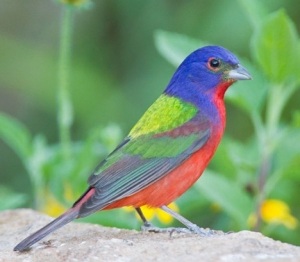 Apologies to any birdwatchers that recognise this as a Painted Bunting, and not a common brown sparrow that has been ‘jazzed up’ by an Alcatraz inmate.

I read about the Alcatraz painted sparrows in a book by former inmate Darwin Coon. Back in the 1960s the Alcatraz prisoners creatively used their painting equipment on the local brown sparrows they had captured. The ‘pimped’ sparrows were then released back into the wild.

This was relatively harmless fun, until the Alcatraz ‘colony of exotic birds’ caught the attention of the press and local branch of the Audubon Society (similar to the British RSPB).  On the ensuing field trip to Alcatraz the hoax was exposed, with considerable embarrassment for the authorities and retribution for the prisoners.

Darwin Coon cites this as one of the examples of ‘sticking it to the man’ he experienced during his many years of incarceration. The idea struck a chord with me. Over the years I’ve encountered many people who claim to be ‘sticking it to the man’. Frequently this is at work and appears to have a lot to do with employee disengagement.

The Urban Dictionary (a great resource for decoding my kids conversations) defines ‘stick it to the man’ as, “to perform an act of vandalism or general civil disobedience in order to oppose the power of the man”. You might now ask, “who is The Man?”

The Man is a slightly nebulous concept that can be both positive and negative. For ‘stick it to’ purposes ‘The Man’ is a very powerful and shadowy corporation or government body that is acting oppressively and ‘keeping us down’. It’s not possible to actually identify ‘The Man’, which brings me to the link with employee disengagement.

On occasions I’ve heard people complain about ‘Them’ as being the cause of their problems in work. When questioned on who ‘Them’ are they give a vague explanation, generally pointed in the direction of ‘people at the top’. They might as well be talking about ‘The Man’.  It’s disappointing how much effort some of these people then put into ‘sticking it to the man’ and dragging down an organisation. I’ve heard this behavior referred to as ‘organisational terrorism’ or plain old meetings sabotage. I’m sure many of us will know of an individual who is working hard, ‘sticking it to the man’ in their workplace.

If you fancy practical advice on ‘sticking it to the man’ have a look at this video. As a parody it’s great, but it does make think, “what is the point?” At the end of the day, acts of vandalism or disobedience against The Man (persons unknown and unseen) are ultimately pointless.

Returning to disengaged employees its worth thinking about what can be done about it. One suggestion I heard is to make ‘The Man’ more visible. Apparently it is far easier to justify being negative towards the unknown or unseen than it is to someone who you recognise, and who knows your name. There may be a lesson here for leaders and managers to be more visible and get to know their employees. Maybe then there wouldn’t be a ‘Them’ or ‘The Man’ to ‘stick it to’?

Back on Alcatraz ‘The Man’ (The Warden) was pretty obvious and the regime was oppressive by design. I think ‘sticking it to the man’ by jazzing up a few sparrows wasn’t that bad (animal rights permitting) after all, according to Darwin Coon the alternatives could be much worse.