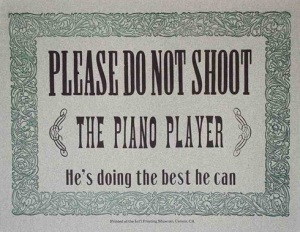 The good old expression, shoot the messenger has been around for ages, but it’s still very relevant, particularly to me.

Basically the (blameless) messenger, bearing bad news receives some form of punishment, just for being the unfortunate individual that delivered the message. Enough said, a pointless act, but it happens.

Here’s how my situation plays out.  Friday night, out socialising with my wife when I am dispatched to phone the kids and check they are back home safely. My enquiries reveal that there has been an unfortunate incident involving teenagers, illicit drink and an elder brother videoing the embarrassing antics of his sibling which he is now sharing with their peer group. Oh joy.

I convey the bad news to my wife, “darling, the lads have been a little over exuberant tonight….”  Massive failure on my part, and I end up full of metaphorical bullet holes, and apparently the cause of all the problems.

So, here is my guide to avoiding being shot as the messenger. As relevant I think to the world of work, as it is to domestic situations.

Narrow Expectations. Before you blurt out the message, just ask the question: “what were your expectations?” If expectations and reality are massively wide apart expect some gun smoke. This is where your opportunity to manage the message comes in. I’m not suggesting telling fibs, but warming people up a bit and narrowing the expectation gap can be useful.  Alternatively you can just run away, like I should have when I found out my wife’s expectation was that the kids were at the Baptist Chapel Youth Club (on a friday night?).

Be Process Perfect. Don’t allow anyone to pick holes in your process or actions as the messenger.  There is an interesting phrase ad hominem  which is about undermining something by pointing out a negative characteristic or belief of the person supporting it. I’m talking about the same sort of thing here. Don’t give people the opportunity to undermine you as the messenger by following instructions and process perfectly.  In my case this was a rapidly delivered job. Phone kids (several times), also phone their friends, check in with grandma, make sure nothing is on Facebook, deliver threats about posting on Facebook etc. Quickly return to my wife with the message, without lingering at the bar for a fortifying drink, and most importantly, not having a laugh at the video myself. Perfect, I’ve done as I was told.

Don’t wrestle with pigs. Because you will just get dirty and the pigs really enjoy it. This expression is attributed George Bernard Shaw  but I’ve seen it used to describe lots of situations. For me the gist is, don’t get involved in arguments or discussions where the other party isn’t prepared to hear bad news, however compelling the facts or evidence. In my situation this meant sticking to a clear explanation of the facts, not justifying anything, not blaming anyone and trying to extract myself as quickly as possible, by offering solutions.

Disclaimer: I would like to point out that I would never make this wrestling comparison to any discussion with my wife; this is for illustrative purposes only.

In the end, everything worked out fine. It actually was a bit of teenage over exuberance and we have a whole week of half term (oh joy) for the dust to settle.  Something else far more entertaining, (involving other people’s kids hopefully), is bound to have happened in the meanwhile. I’m sure that some of these lessons could be transferred into the world of work; after all, it’s not that different to dealing with truculent teenagers.