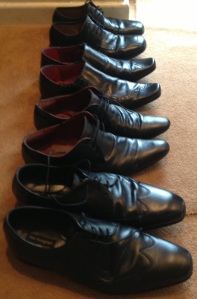 This isn’t something you see very often in our house. Four pairs of shoes (size 8 -13) all nicely polished and lined up by the front door. It was a nostalgic reminder of a ritual from growing up.

Sunday afternoons as a schoolboy were about my shoe cleaning ritual. It had started with my rugby boots and developed into an epic task of cleaning as many pairs of shoes as I could find. I really used to relish the process of:

As a physical activity it wasn’t particularly demanding, just a routine I repeated, but it did allow me time to think. Thinking about the week that had passed and preparing for the week ahead. There was actually a lot of other stuff going on as part of this ritual, which only really makes sense to me now:

Taking care of valued possessions. The act of cleaning the shoes was about making sure they were fit for purpose. Also prolonging their useful life through repair and maintenance. I really did cherish my rugby boots.

Taking care of others. Thinking back I did enjoy the thought of having my siblings, mother and grandmother wear shoes I had looked after for them. My strongest sense of pride however came from cleaning my father’s shoes, even the terrible tan colour ones I could never find a polish to match. (My brother once threw up in those shoes – something weirdly symbolic in that I’m sure).

Making the best use of my time. This probably came from my time in the Cub Scouts. I always used to feel justified that I had done something useful with my time on a Sunday evening, setting me up for school on Monday.

My kids claim that they know nothing about the process of polishing shoes, due to my poor parenting skills they inform me. Apparently they aren’t alone.

I had to buy some polish in a local shop this week which was slightly odd. First off the polish was kept behind the counter. I can’t fathom out why. It’s hardly dangerous medicines or high cost like the vodka they keep there. Perhaps it was because they didn’t know what shoe polish is? The young guy serving said that he had never used shoe polish and asked how it worked. I did explain. I then got a guided tour of his £90 trainers that last him about six months. Great, I was heading off to polish some shoes I’ve used for two years and have had re-soled and re-heeled twice. I walked away with the distinct impression that he thought I was some weird old codger.

For the benefit of my local shop worker and my kids, here’s a video on how to polish your shoes. I hope they watch this. On their behalf I have picked one of the better videos with a really cool guy, with cool clothes and nice hair. Perhaps they will learn something from him rather than me.

On a positive note, I did notice that my middle son had cleaned his rugby boots last week, first time ever I think. OK, the sink was full of mud and the draining board was covered in grass, but it’s a start. At least he’s stopped asking his grandmother to do it.

Photo Source. It’s one of mine, as are the smallest pair of shoes.