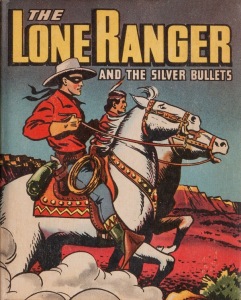 “There isn’t a Silver Bullet solution” is one of those phrases that gets used quite a lot, you might have heard someone use it during a lapse into ‘management speak’?

Two things make me wonder about this; in many situations people actually want the ‘Silver Bullet’ and secondly, this is despite the fact they know that other silver bullets haven’t worked previously. Stick with me for a moment while I try and explain some of my thinking.

Silver Bullets and the Lone Ranger.  The magical power of silver bullets (you can read about here) goes back to the mystical times of Grimm’s Fairy Tales, where silver bullets were the only things that could stop (kill) dangerous and terrible beings like werewolves. However, I prefer the use they were put to by the Lone Ranger (it’s kids telly of my youth thing).

The Lone Ranger would ride into town and save people from the baddies without any wholesale killing and carnage. He used silver bullets in his gun as a symbol of justice, law and order. Very importantly, the expensive silver bullets were a reminder that life was precious and should not be thrown away. The point of the Lone Ranger not shooting to kill was that the law would ultimately provide justice.

Just to crush my childhood memories, one thing ballistics science tells us is that silver bullets probably aren’t as lethal as conventional lead bullets, an important point to remember for later.  And we mustn’t forget Tonto, the Lone Ranger’s buddy. This modern video from Robot Chicken emphasises the high cost of using silver bullets with a profound observation from Tonto at the end.

So what has the Lone Ranger got to do with Richard Pascale? Thanks to Matt (@ComplexWales) for opening my eyes to the work of Richard Pascale. This British Library, Management and Business Studies Portal article about Pascale’s work on; Change Management, Organisational Agility and Complexity is a good place to start reading.

One of the most well known pieces of work from Pascale is what he did to map out the ‘business fads’ that were being used in organisations. This looked at the period from 1950 up to 2000 and is illustrated in the graphic below.

The vertical axis measures influence of each management theory (fad) and it is fairly self explanatory.

In the space of 50 years the workplace has become overwhelmed with management theories on how to run a better organisation.

Having discussed this with a few people it is quite sobering to add up the number of theories we recognise and how many we’ve been subjected to. What is even more worrying is the number where I was once a willing conspirator in implementing that particular fad…  Have a go yourself, there’s nothing to be ashamed of (……or maybe not).

Silver Bullet Syndrome. This is the link between Pascale and the Lone Ranger. I am willing to bet that at some time each of these management theories will have been presented as a ‘Silver Bullet’, to solve the problems of the organisation.

I’m not sure if its an official syndrome, but Silver Bullet Syndrome has been described in by Kevin O’Donahue on the Techwalla site here. Definition attached.

What I do know about Silver Bullet solutions is:

Why do we have Business Fads and over use of Silver Bullets?  This is a tricky one to answer. I’m hoping that Matt (@ComplexWales) will ‘ride into town’ with some definitive evidence on the cognitive biases and psychology that explains this. In the meantime here are few suggestions from me: