I’ve visited 100’s of factories over the years, as part of previous jobs, and in my leisure time (ask my wife). Sometimes I’ve been accused of getting a bit over enthusiastic. I love seeing things being made. However, I’ve never been so greatly affected at an emotional level as I was when I visited GUREAK in Donostia-San Sebastián yesterday.

GUREAK is an organisation deeply rooted ‘here‘ in Spain’ smallest Province, Gipuzkoa, which is part of the Basque Country. What GUREAK do is social labour inclusion, basically they create stable employment opportunities for people who require extra support, explained in the picture above taken from their website.

GUREAK aren’t a part of Government, a Government Agency, a Charity or a Cooperative (although that option was considered). They are a commercial company, who’s existence depends upon its ability to remain financially sustainable in a competitive world. GUREAK achieve that and have been successfully doing it for over 40 years.

A quick history of GUREAK. The history and development of GUREAK is very well explained on their website, link here, and in a video I’ll link to at the end of the post. Both links are well worth studying, I just wanted to emphasise a few things:

Sustainability, Profitability and Social Benefit. There’s just five things I want to say that give a sense of just how impressive GUREAK are.

Finally, I did say the visit to GUREAK affected me emotionally. Here is their corporate video which I encourage you to watch. It explains things about where they came from and what they do beautifully, it is also a great advertisement for Gipuzkoa. The bit that particular affected me was towards the end (7.20mins) where one of the workers Juan Carl is retiring and leaves the building, just as a young man enters…

Thank you so much to Maria Larraza Malkorra at GUREAK for sharing your knowledge and inroducing me to amazing people at GUREAK. I’m looking forward appearing to the video of GUREAK news. Also massive thanks to James Wilson from Orkestra, the Basque Institute of Competitiveness at Deusto University, for introducing me to Maria. Eskerrik asko to you both.

Note. The pictures above have been taken from the GUREAK website.

The rest of my Churchill Fellowship blog posts can be found here: https://whatsthepont.com/churchill-fellowship/

This is my own picture, me with Maria. 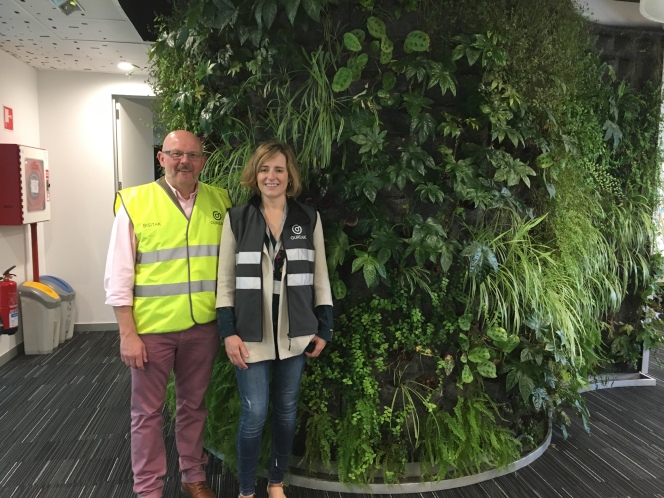