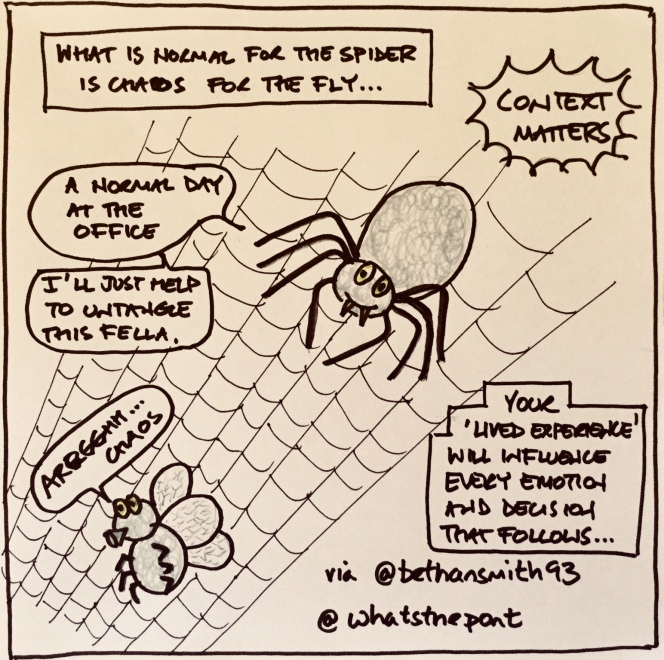 Context is everything. Thanks to Beth Smith (@bethansmith93) for ‘what is normal to the spider is chaos to the fly’, which inspired the illustration above. The quote neatly describes how different experiences of a situation (the context), can massively influence your feelings and also the decisions you make about the situation.

For the spider it’s ‘business as normal’. A calm and rational approach is the way to proceed. For the fly, its chaos. Total panic stations and doing anything to get yourself out of a dangerous situation. Calm and rational thinking is a long way off for the fly.

Referring to ‘doers’ and the ‘done to’ might be a bit judgemental and upset a few people, but so is the Spider and Fly analogy. However, it does get to the heart of a big issue in co-production, POWER!

Power, and giving it away. One of the other things that popped up the Co-production Wales conference was a quote from Aneurin Bevan, “the purpose of getting power is to be able to give it away”. It was the 70th Anniversary of the National Health Service, so an Aneurin Bevan quote was inevitable, but particularly relevant as it happened.

The context around the quote was to support the need for co-production and raise the question of power in the co-production of public services. For me, the quote emphasises the need for a change in the established power relationship. Moving away from a situation of ‘doers and the done-to’ and towards ‘us’ and ‘we’.

I appreciate that this is a really hard thing to do. Voluntarily giving up power seems to go against the general flow of what is ‘expected’ in the world, and how large parts of society seem to work. The examples of people clinging desperately to power, for example the departure of Robert Mugabe, seem to outweigh the examples of people stepping aside and handing over power graciously.

Why would things be any different in Public Services with someone deciding how a service should be delivered? You might have observed some of these power grabbing, consolidation and (grimly determined) retention behaviours in your own area of activity…?

If you want a sense of the scale of the challenges around co-production and in particular power, have a read of ‘A Simple Guide to Co-production’ from Recovery in the Bin. It’s written by user led mental health survivors and supporters (link here) and might not make comfortable reading for some.  I do however recommend having a look and reflecting on what’s being said. It rang true in many places for me and influenced the spider and the fly illustration I drew.

Good News! People are already sharing power. Everything finds its way back to my Churchill Travelling Fellowship at the moment. One of the organisations I met in the Basque Country was the ner.group where, ‘ner’ stands for ‘new style of relationships’.

The ner.group is made up of 23 organisations, employing 2,700 people, with over 400 million Euros a year turnover and they are really serious about their social contribution. They are well worth paying attention to. I think there are very strong connections between what co-production is trying to achieve around relationships, and what the ner.group area is already doing.

Have a look at the screen shot of WHAT UNITES US from Organisation Style page the ner.group website below.  I think that what they have described is pretty close to what co-production is aiming for; ethics, making decisions together, freedom, responsibility, transparency etc is what they focus upon. Very much a new style of relationship…

I’m working my way through books that describe this approach in detail, with practical examples of where it has worked. Thanks to Pablo and Jabi from ner.group generously gave them to me. I’m planning to write a post about the work they did with an industrial worker cooperative, Panelfisa Automotiveating.  This gets to the heart of successfully shifting power and building trusting human relationships.

Everything is possible… Context is everything, and the spider and fly example illustrates this beautifully. Building co-productive relationships that do this isn’t easy, but there are successes in Wales, and there are some large-scale successful examples in the Basque Country. The ner.group run businesses, operate in a commercial world and are doing things I think any co-producer would aspire to.  If it can be done in the business environment surely it can be done in public services? Andy Middleton might have something to say on this…

So, Whats the PONT?

This is one of the books I’m reading about the ner.group