Here are two explanations of the same point. The picture and the academic text, choose which ever one you prefer. 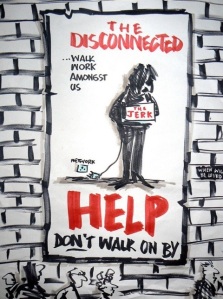 Following the why is good practice such a bad traveller post last week I thought I’d better back it up with a bit of academic rigour. Where better to look than one of the Welsh Public Services Summer School speakers, Professor Dr Alexander Fliaster of the University of Bamberg.

Part of the talk from Dr Filaster was about knowledge exchange in social networks, using some research from German companies. One the points that grabbed my attention was the (research proven) revelation that certain people are blockages because co-workers don’t like or trust them. The consequence of this dislike was that people wouldn’t share knowledge, even if it would benefit them.

Obvious really, but it was nice to hear it from a Professor, with some science to back it up. The behaviours and attributes of this sort of person were neatly summed by Dr Filaster in three words, “The Disconnected Jerk”. This was captured by the graphic facilitator Paul Richardson.

One of the other things I wrote down during the presentation was: “if someone is disliked by their co-workers, irrelevant of whether they are competent or not, people will not go to them for information”.  I suspect many of us have experienced this or seen this happen. It certainly got plenty of nods or recognition from around the conference hall.

Turning to the academic explanation, this paper Knowledge Mobilization Through Social Ties: The Cost-Benefit Analysis, provides the quote below. “Thus, even though conflicting parties must often interact and communicate on a daily basis, this frequent contact does not mean a close relationship and does not include a trustful sharing of ideas. Likewise, frequent contacts with a little-trusted colleague who is known for his opportunistic behaviour usually also do not lead to sharing interesting information or the collaborative creation of new knowledge.”

For me, the picture of “The Disconnected Jerk” works just fine (we know who you are).