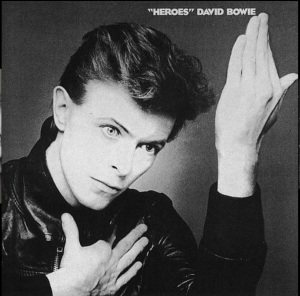 Question: What has David Bowie and Brian Eno, a 1970’s recording studio ,the “Heroes” album, and a pack of cards called ‘Oblique Strategies’ got to do with your Corporate ‘brainstorming and innovative creativity’ team away day session?

Answer: Quite a lot actually.

Sorry to disappoint those hoping for some pointers on ‘creativity enhancing pharmaceuticals’ (although these may be necessary on the team away day). This post is about a technique to disrupt familiar thinking patterns, that was used to great effect in the music industry almost 40 years ago.

I must thank my colleague Alastair for introducing me to Oblique Strategies and this BBC Radio 4 programme by Simon Armitage, which I’d recommend. Alastair actually owns a set of Oblique Strategies cards (2001 version), and let me hold them, here’s a picture I took when he wasn’t looking.

Oblique Strategies were produced by Brian Eno and Peter Schmitt in 1975 and come in a black box, with gold writing and the top card bearing the words “over one hundred worthwhile dilemmas”.

It’s when you look at rest of the plain white cards that things start to get a bit interesting, all sorts of ‘oblique’ phrases appear such as:

How Oblique Strategies Work. The idea is that you use the cards to jolt you out of familiar thought patterns, and into a mindset where you explore something different. You literally remove a card from the deck, read what’s written on it and have a think about what it means. There are some rules but you will need to get hold of a set of cards to read for yourself (I’m not about to stray into copyright territory here).

This is essential stuff for musicians (and managers) who are burning up expensive recording studio dollars with the equivalent of ‘writers block’. The cards were apparently used by David Bowie while he was making his Berlin Trilogy of albums (Low, “Heroes”, Lodger) and by the likes of REM and more recently Coldplay. Given the end product of some of these recording sessions, it’s not surprising that in some quarters the Oblique Strategies cards have developed an enigmatic and almost mystical status. It is a bit tempting to think that an oblique phrase on a randomly selected card inspired the latest million selling Coldplay single. The enigmatic status might also have something to do with exceptionally clever marketing and ‘signed limited editions’, given only to close friends.

So what has this got to do with corporate brainstorming sessions? Well, anyone who has been on a lateral thinking or creativity course; or has read anything by Edward de Bono, will be familiar with the concept of disrupting existing thought patterns. A quote from de Bono, “creativity involves breaking out of established patterns in order to look at things in a different way”, nicely sums up what the Oblique Strategies cards and other ‘disruption techniques; are trying to achieve. The approach has become one of the main techniques used nowadays in the business of stimulating creativity, almost as common as bringing together people with diverse viewpoints and experiences.

It is interesting to think that a practice with 40-year-old roots in the music industry (and was a bit esoteric and unusual) has now been transferred into the mainstream of business and corporate life.

Just to shatter the enigma and any illusion of mysticism around Oblique Strategies a bit further, you won’t be surprised to learn that there is an app for Oblique Strategies, as well as a few closely related ‘productivity apps’. I’m actually quite disappointed by that, it feels a bit too corporate and mainstream, and I really enjoyed the feel of the cards.

Final thought. I wonder if there is any mileage in spotting Coldplay lyrics that could be Oblique Strategies phrases? I’ve always been taken by: