Question: Can you think of an organisation you have been part of, one where there is an unwritten rule that almost everyone complies with, and nobody really knows why?

This rule dictates how people behave and is often about stopping people doing something. The reasons why the ‘rule’ exist are unclear, and nobody can adequately explain the behaviour.

It is part of “the way things are done around here”.

Information Governance, Data Sharing, IT Security.  Just to help you, here is a situation you might have experienced. You know the sort of thing “you are not allowed to read that very valuable information because it is on a WordPress Blog. There are ‘security issues’ with WordPress. The IT department will cut and paste the text into a word document and will email it to you …… it will be available in 10 working days”.

I’m not making this up, I have seen this happen in recent history. The justification is always some hazy requirement to comply with ‘IT security’ and is justified by referring to some terrible incident (usually not explained) that happened in the past.

I have occasionally (very unfairly, in dark moments of frustration) thought this sort of thing was down to some IT people, in some organisations, being more interested in job protection, the joy of sheer awkwardness and making everyone play by their rules; rather than treating the users as customers.

This was probably as a result of me watching too many episodes of The IT Crowd. I realise now I was very wrong, sorry.

5 Monkeys and the Path to Enlightenment. I’m grateful to my friend Geof (an IT person) who helped me with my unjustified prejudice and pointed me at the 5 Monkey Experiments. This gives an explanation of why groups of people might do things (comply with rules) for reasons they don’t fully understand. There might be a good logical explanation for the behaviour, but it is buried in the mists of time. Way back in the ‘corporate memory’ if you like.

A quick way of explaining the 5 Monkeys Experiment is this graphic.

If you prefer here is a 90 second video of the 5 Monkeys experiment. However if you want an even better explanation, get Matt from Complex Care Wales to describe it – with full Kung Fu movements!

Detecting  5 Monkeys Behaviour? Does any behaviour that might fit the 5 Monkeys theory come to mind after those explanations? I’ve heard of a few over the years, and would be happy to add to this list:

Is this all too good to be true?  The 5 Monkeys Experiment does provide a very helpful to explain away some features of organisational life. There are plenty of examples of compliance with rules you cannot explain and behaviours that fit the 5 Monkeys model.

I am however just a bit sceptical.

Firstly because I’m not a monkey, and I don’t really like getting compared to what happened in a monkey experiment. Secondly, there is a bit of doubt about the experiment taking place as described. Have a read of this thread on the Skeptics Website which questions the source of the information. I’m hoping Matt from Complex Care Wales will zoom in at this point and fill in the gaps in my knowledge.

Finally, despite my scepticism, I do like the metaphor it provides….if you spot a new colleague (new monkey) having their new ideas crushed by existing staff (being beaten up by the old monkeys), step in and tell them the 5 Monkeys Experiment story.

So, whats the PONT?

Thanks again to Geof and Matt for prompting this post. 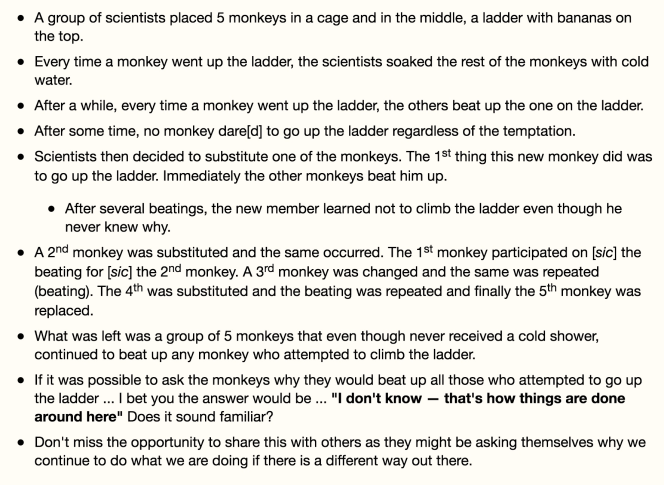