The Experiment So Far.  On January 1st I started a personal experiment to try and record some of the interesting things I bumped into most days. The thinking behind it is explained here: An Experiment for 2016 #TiL253.

What I’ve learnt so far:

The Goldilocks Zone – this emerged as I was writing the post to introduce #TiL253. One of my kids was astonished that I didn’t know this piece of basic interplanetary theory.

Archie Cochrane X-Rays in the Rhondda.

This popped up after aTwitter exchange about TiL with Sian Jones (@evidentlysian). Coincidentally I’d recently had a conversation about the Cochrane archive with my cousin who works in Llandough Hospital where it lives.

This did pop up in work related conversation, but it’s also of a personal interest, if you know what I mean……. (worth a read).

“Do. Or do not do. There is no try” I genuinely did no know this Yoda quote…..oh the shame I feel….. first Goldilocks Zone, now Star Wars entry-level material.

The Yoda quote popped up in a #TiL253 related Twitter conversation, where I was completely clueless (so I stayed quiet and kept my head down for a while – always best on Twitter I find).

Thankfully Usha Kuchimanchi (@learntodoc) saved the day and explained the reference. It’s opened my eyes to a new world of Yoda quotes…. 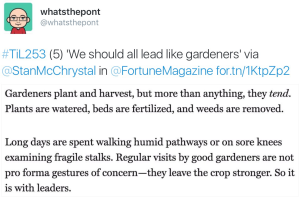 Another one that emerged from #TiL253.

Thanks to @tamsinStirling1 I ended up listening to a very good BBC Radio 4 programme on the Future of Leadership by Margaret Heffernan.

The interview with Stanley McChrystal and the quote about leadership being like gardening seemed perfect.

Extensivists.  Popped up in a work conversation – I was truly astonished by this word.

So have a few people I’ve tested it on.

This came from a Randomised Coffee Trials (thanks David Gurteen) conversation and is an example of something I wanted to remember and share.

I did share it, with some people who found it very helpful to know about what was happening with Go Girls, hopefully that might also help Go Girls.

I love the idea of Keynote Listening and getting the ‘Sage off the Stage’. It came from a work conversation and is something I’d like to follow up.

That’s it for my first week of #TiL253. I’m not sure if this summary format works. I’ll have a look at Trello and Storify to see what the future alternatives are.