This might be my daftest idea yet. If it’s as obvious as I think, why isn’t it already happening in Wales?

Here’s the idea. An intensive University Degree Course, aimed at the over 50’s. On the course the participants will; create real businesses, with a strong social purpose (cooperatives if possible), and get a degree out of it. The continuation of the businesses after the course, and graduates that are; happy, confident, full of drive and social purpose, will be an ‘added value’ outcome. And the slightly controversial bit… link it to voluntary early retirement payoffs.

Does that sound realistic, or shall I get my coat and leave…?

Mondragon Team Academy (MTA) lit my fire. Basically, MTA is a degree course where participants really do create businesses, learn about business theory while doing the practical work and gain a degree from Mondragon University at the end. There are other bits of ‘magic’ that make MTA special and exciting in my view like:

If you want to know a bit more about MTA try the following:

Where do the over 50’s fit in? There are a few things that have spinning around in my head that prompted my ‘daft idea’ and this post.

This really could be a daft idea.  There are many questions crashing around my head now. I think there is a need to do this sort of thing, I think there are probably people who would want to do it, and… it would probably produce businesses that add value. However, there are things that might prevent it like:

In the spirit of working in the open (like I said I was going to), I’m going to press publish and see if anyone agrees it is a daft idea, or if they have answers and something could be done… 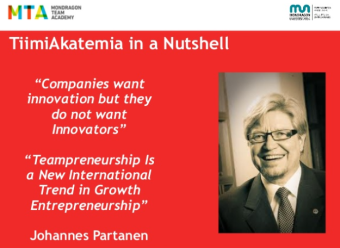 An interesting quote from Johannes Partanen from  Tiimi Akatemia – Team Academy at Jyvaskyla University in Finland.

Maybe the Team Academy approach is the solution to organisations getting the innovation they want, without giving  innovators the ‘anti-body’ treatment?  Something Paul Taylor from Bromford Lab might have a view on?

My other Churchill Fellowship posts can be found here