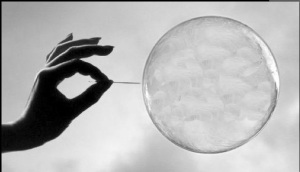 After wondering in previous posts about how many people actually participate in online communities of practice, my son helpfully pointed me in the direction of the 1% rule of Internet culture. Fantastic, this felt like the world of 90% lurkers I recognise.

Then the BBC goes and burst my bubble. In their online spring briefing they pronounce that participation rates in online activities are much higher, more like 77%. I’m confused; almost 8 out of 10 people actively participating? This doesn’t feel like the world I inhabit.

The 1% rule or the 90–9–1 principle is a hypothesis that more people will lurk in a virtual community than will participate. It’s been around since the mid 2000’s and has been likened to the 80/20 rule (Pareto principle), where 20% of a group will deliver 80% of the activity.

For online communities the 1% rule states:

Based upon my experience this feels about right and seems to be a very plausible hypothesis. It could also apply to some of the offline communities I’ve experienced.

The BBC Internet Blog article presents the findings of a survey of over 7500 adult internet users that was gathered over an 18 month period. One of the key points author Holly Goodier makes is, “digital participation now is best characterised through the lens of choice. These are the decisions we take about whether, when, with whom and around what, we will participate. Because participation is now much more about who we are, than what we have, or our digital skill.”

What I took from the article was that improvements in ‘ease of participation’ mean that there are no longer the technical barriers like there used to be. The other thing it says to me is, the content has to be good – something you want to / are motivated to engage and participate (no surprises there).

The BBC findings have generated a bit of debate. In this article by Bobbie Johnson on GIGAOM he argues that the BBC are comparing ‘apples with oranges’ to arrive at the 77% participation figure. In reality people (like me and many I know) use different parts of the internet for different things and the rule of 1% still applies when you look at things broadly. Not everyone agrees with him though and someone has commented, “The BBC are never wrong and you’re clearly are…”.  Oh dear, might be a lesson here…… be careful about criticising the BBC.

Coming back to my world of online communities and why I think the rule of 1% still applies:

So what’s the PONT?