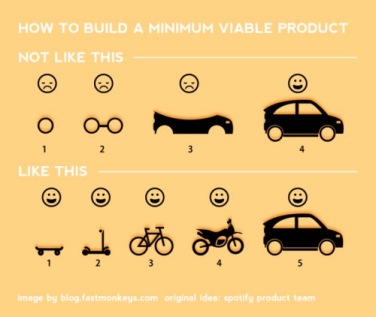 Speeches you never hear at a Corporate Conference: “… Our Transformation Programme is going to be small and imperfect. We are going to do many small things that probably won’t work straight away. However, we will learn lessons from these ‘experiments’ and apply the learning to a better next small thing, making sure we progressively move forward, in the right direction…”

If you have heard this sort of thing at your Corporate Conference, you probably don’t work in public services, and you can switch of now if you like.

Transformation is a BIG word. Most ‘Transformation Programmes’, (particularly anything to do with Culture, Values or Behaviour) talk about BIG changes, often in impressive language. This frequently involves the following; a clearly defined vision for the endpoint, a communications plan, milestones and targets, and a carefully crafted ‘road map’ which ‘articulates the journey’ to the troops.

As far as I’ve seen the idea of small ‘experiments’, testing multiple ideas, accepting that failures will happen, and a process of learning and iteration rarely feature. The ‘Transformation Programme’ is about certainty and guaranteed success, there can be no room for failure (it’s too big to fail). I’ve touched on this idea before in the comparison of Trojan Mice with Trojan Horses.

Minimum Viable Transformation. Have a look at this graphic from Deloitte University Press before I continue.

MVP has been around in the world of digital startups and IT development for a while and seems to work as an alternative to the traditional: ‘Big Bang, linear path focused on excellence of delivery and detailed planning’.

It think MVP is a really useful approach which could be applied to any change in how services and products are delivered in public services – and even the ‘transformation programmes’.  You can read more about Minimum Viable Products here. In essence the basic process involves:

MVP’s and Public Services – A Marriage Made in Heaven.  For me, there seem to be a number of opportunities and benefit in using the MVP approach to tackle some of the challenges facing public services: 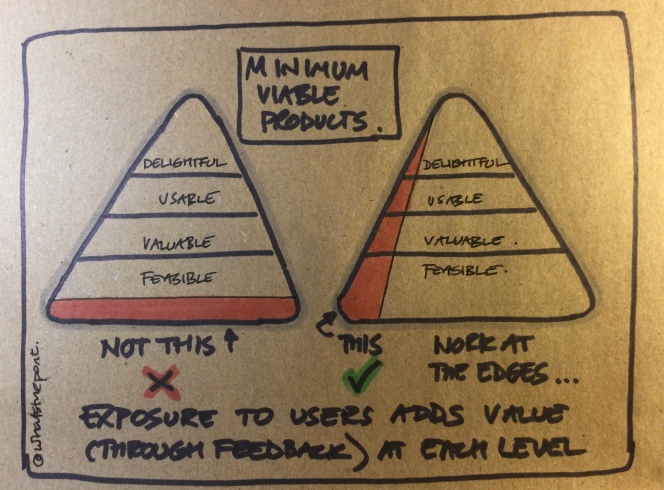 The Deloitte article is well worth reading. Minimum Viable Transformation is a useful concept, but will need some serious thinking and behaviour changes if people are to use it.

One of the areas Deloitte article mentions is ‘working at the edges’. It is far easier to do this sort of thing in places where the ‘core business’ isn’t threatened and you aren’t fighting against long-established views and  power structures.

I do hope the graphics I’ve used here are helpful in getting the ideas across. In particular the first one where a Transport MVP starts as a set of disconnected wheels whilst the other (better approach) starts with a skateboard and builds to a car. Good Luck!

Linked Posts: Trojan Mice, why it matters to win small.

Update: A number of people have pointed out that the skateboard to car graphic is useful as an illustration, but not representative of what actually happened – cars did actually appear in the world before skateboards (if you want to get technical it could be an example of ‘forking’). The graphic does get the point across though. For something more realistic have a look  at the Minimum Viable Bridge (MVB) example below, from caroli.org.  Image Source: http://www.caroli.org/mvp-examples/